Amsterdam is a pretty small city compared to other Western European capitals, but there’s a ton of sites to see.

Red Light District (away from the windows, so it’s ok)

Fun fact: only 5% of the women are Dutch. Women of the same heritage are alongside each other in their windows. That’s right, you can stroll through the Latina women, Asian, African, Eastern European, you name it! My favorite is that De Oude Kerk, Amsterdam’s oldest church, is in a small square right across from where the Dominican prostitutes have their windows. Also look out for the blue lights, those are the transsexual ladies.

Check out Warmoesstraat! It’s my favorite street in Amsterdam! It’s exactly what you’d picture it to look like. It’s one of the oldest streets and it’s lined with art galleries, coffeeshops, leather bars, quick bites, and fetish shops. It’s very colorful and a great place to spend some time to enjoy the strange juxtapositions that make Amsterdam an amazing city.

Amsterdam Centraal is a marvelous piece of architecture, and unless you are flying in, will be the first place you find yourself in Amsterdam.

In the center of Amsterdam you can walk along Damrak and eventually hit Amsterdam’s Dam Square (oh how I love that name), the biggest in the city. It has the National Monument and the ornate Dutch Royal Palace, and not surprisingly is filled with tourists. You may not be able to get a picture without anyone else in it, but the architecture is really impressive. 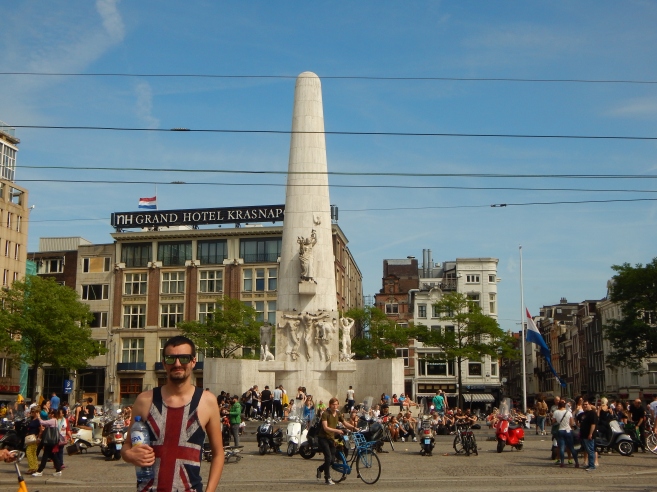 You’ll also find the Sex Museum, which is the first one in the world. It’s worth a quick visit; it’s informative and can easily be done in an hour. But the highlight to Amsterdam’s downtown to me is Begijnhof. It’s a quiet oasis in the middle of downtown, a tranquil little courtyard with a garden and tiny houses. Outside the entrance is a cute little square called Spui.

Begijnhof, my favorite spot in Amsterdam

In the Western Canals there’s the Anne Frank Huis, where she hid captive for many years and of course where her diary was written. I went on my first visit, but I passed it this visit and the line was extremely long. I would recommend getting up early and being the first one there, it definitely is a great museum. Around the block along the canal there is the Homomonument which is a monument dedicated to the plight of LGBT individuals and their continued journey for equal rights worldwide. It may seem visually underwhelming, but it is the first of its kind! Brownie points to Amsterdam.

In the Southern Canals, there’s Rembrandtplein, a fairly large square where locals come to enjoy some sun in the summer, and where many of Amsterdam’s most popping nightclubs are. There’s also the Bloemenmarkt, which is Amsterdam’s flower market, very worthy of some colorful photos.

There is an array of museums that many visit that I’ve never gotten the chance to go which include:

The Van Gogh Museum & Rijkmuseum (where the famous Amsterdam sign is)

Rembrandthuis (home to the artist Rembrandt) 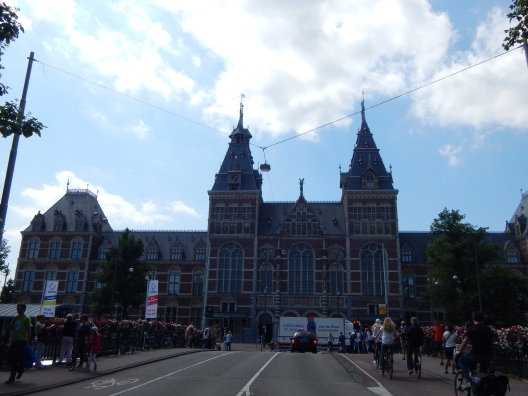 Lastly, Amsterdam has an amazing selection of food! Did you know that Maoz (really good Middle Eastern food and falafel) is from Amsterdam? Waffle stands are everywhere, the traditional Dutch way is to just have it with the caramelized sugar. Although many kebab shops and other places add colorful frosting to the waffles, it’s not traditional but it sure is tasty!

There are tons of Indonesian and Surinamese restaurants. Thanks to Dutch colonialism, these two cultures are very prevalent in Amsterdam. Unfortunately I didn’t get the chance to eat Indonesian, but I tried Surinamese at Kam Yin, which is very close to Amsterdam Centraal.

Although I was originally skeptical since it’s a Surinamese/Chinese restaurant, this was recommended to me by several Surinamese people that I met throughout my stay. The owner is from Suriname, the décor is Chinese. The Surinamese dishes are very Caribbean: seafood and rice heavy, but the Surinamese spices that are offered on your table are utterly delicious (not for the light-hearted!).

For a taste of Dutch, try Moeders (means mothers in Dutch, how precious). It’s an adorable establishment along a canal in Jordaan where it’s all home-cooked and hearty Dutch food. Inside there’s hundreds of pictures frames of customers and their mothers. If you bring your mother on her birthday, she eats for free and they arrange a special surprise for her. This restaurant was the highlight of Amsterdam and Dutch cuisine for us. The clientele were largely Amsterdam suburbanites who drive a good hour just for hearty homemade cuisine that reminds people of the holidays and the Dutch truly celebrating their culture, it’s a magnificent place to experience. I’ve included the names of what we ate, descriptions available here. 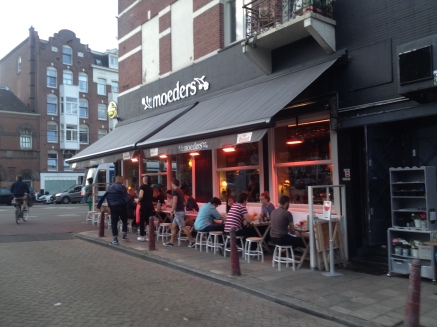 The appetizers! Above: Small egg in the meadow (most precious name ever) Below: Miss pumpkin

The main course! Above: Hachée Below: Vegetarian Hotchpotch 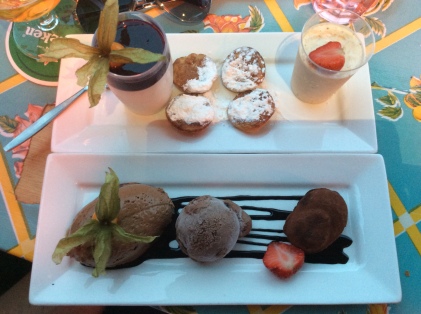 Van Dobben (website only in Dutch) near Rembrandtplein is another place to try Dutch food, specializing in Dutch meats. The meat croquettes are filling and delicious, they’re also open late to cater to drunk clientele.

For drinking, Roest is one of the hotspots with locals right now. Located in the Eastern Docklands of Amsterdam, Roest is set in converted industrial buildings which have outdoor picnic table seating for a nice day, and there’s live music a lot of the time. This is one of the best spots to meet locals in Amsterdam and to get more suggestions about where to go. A small disclaimer, if you arrive after 8pm you will have to take the long way around. There is a pedestrian bridge that closes after 8pm and if you start heading there to find it closed, the detour is about a 20 minute walk. Plan ahead.

There is the I Amsterdam City Card which will give you unlimited transport (the trams are extremely efficient and convenient), free entry to many of Amsterdam’s attractions, city map, and access to special offers.

Flying Pig Downtown – This is my all-time favorite hostel (and I’ve stayed in quite a few). Great location, great atmosphere, great staff and a great set up for the common areas. Rooms are clean and of good value.

Hotel V Fredericksplein – A little further out in a quiet area, but very sheik and modern looking hotel. Decent value, and breakfast is included and it’s pretty good.